SAN JOSE, CA—The book-to-bill ratio from Semiconductor Equipment and Materials International (SEMI) stood at 0.96 for November. The ratio is based on industry billings and bookings for equipment made by North American makers that is used in manufacture of microelectronics devices. The November ratio means that $96 worth of orders were received for every $100 of product billed.

SEMI reported that North American-based makers of semiconductor equipment had $1.55 billion in global orders in November, based on a three-month average). The November bookings were $1.49 billion, a figure that is more than 25% higher than November 2015 orders.

The three-month average of worldwide billings for North American semiconductor manufacturing equipment makers was $1.61 billion, which was more than 25.2% higher than November 2015 billings of $1.29 billion.

The Figure 1 below tracks billing and booking data from SEMI. 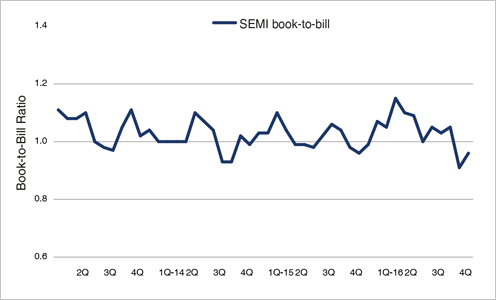 In other microelectronics industry news, the Semiconductor Industry Association (SIA) said global sales of semiconductor products was $31.03 billion in November, which was 2% higher than October’s sales. On a year-to-year comparison basis, worldwide sales were 7.4% higher than the $28.9 billion posted in November 2015.

The Americas market had a 3.2% increase with sales of $6.26 billion. The European market was the only region with a sales drop of 1.6%. The SIA reported sales were $2.89 billion for November.

Figure 2 below tracks semiconductor industry sales on a year-to-year basis for major markets. The bars on the far right compare global sales for November and November 2015.

TOKYO—The Semiconductor Equipment Association of Japan (SEAJ) reported that the three-month average for worldwide bookings was ￥145,865 million, which was 54.2% higher than the November 2015 bookings of ￥94,608 million.

Meanwhile, worldwide billings for Japanese-based manufacturing equipment makers was ¥ 126,170 million. This figure is 3.4% under the October 2016 billings of ￥130,598 million, SEAJ said.

The November book-to-bill ratio was 1.16, which was up from 1.07 in October. The November ratio means that ¥116 yen were spent for every ¥100 of product billed.

On the Flat Panel Display (FPD) business side, the SEAJ reported the book-to-bill ratio for Japanese-based makers of FPD equipment was 1.33, which means that ¥133 was spent for every ¥100 billed.