LOS ANGELES, CA—Water Planet has named Helguera Tecnologias del Agua, SA de CV, as its exclusive distributor for its ultrafiltration membranes in Mexico. Plans are for Helguera to promote the company’s UF membrane technology for use in industrial wastewater treatment to help plants maximize water recovery and reuse.

SEMI reported that total silicon wafer area shipments were 2,858 million square inches during the first three months of 2017, a 3.4% increase from the 2,764 million square inches shipped during the last quarter of 2016. On a year-to-year basis, the new quarterly total area shipments are 12.6% higher than first quarter 2016 shipments and are at their highest recorded quarterly level. Table A lists shipments of silicon during the past five quarters for semiconductor applications.

In other news, SEMI reported that North American-based makers of semiconductor equipment posted $2.17 billion in global billings for April 2017. This sales figure (based on a three-month average) was 4.6% higher than March sales of $2.08 billion, ad nearly 49% more than the $1.46 billion posted in April 2016.

Table B provides billings data between November 2016 and this April. 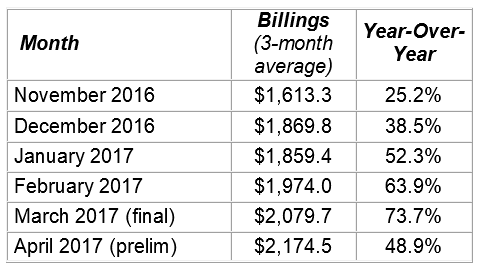