May semiconductor equipment billings up 42%

MILPITAS, CA—SEMI reported that the $2.27 billion in billings by North American-based makers of equipment for manufacture rose 42% on a year-over-year basis. The sales were also up 6.4% from the $2,136.4 billion posted in April.

Billings by Makers of Equipment Used to Manufacture Microelectronics Devices 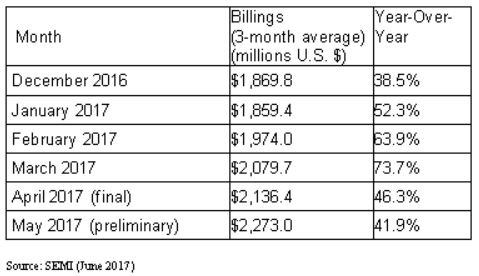 WASHINGTON, D.C.—Worldwide sales of semiconductor devices rose nearly 2% between April and May to just under $32 billion, the Semiconductor Industry Association (SIA) reported.

China remained to largest market with sales $10.23 billion in May, which compares with $8.09 billion in May 2016. The Asian-Pacific region follows with May sales of $9.39 billion and almost $8 billion last May.

Table B shows global sales for microchip devices on a year-to-year basis.